We are on a mission to make people live healthier, happier. People suffer, on a daily basis, from the repercussions of an inefficient, inaccessible, and unsatisfactory healthcare experience. TrakMD is founded to alleviate this bitter situation, for all.

BEIRUT: As a nurse, Ibrahim Fakih knew that the spike in blood pressure his father was experiencing required swift medical attention. He frantically called the treating physician but hit the answering machine repeatedly. Telephone calls to practitioners recommended by acquaintances eventually led to an appointment, but only two weeks later.

“In Lebanon we suffer from a lack of [timely] access to the healthcare system,” Fakih said. More than a year later, he and his business partner Hussain Issa took inspiration from the experience and self-funded a project that intends to provide some fixes to the system.

TrakMD, a digital platform designed to connect patients and doctors, enables users to customize their search in order to identify the right practitioner according to a set of criteria, including the field of expertise, geographic location, availability and gender.

Appointments can be made online at the touch of a button, and a reminder is received by the user by SMS or email prior to the visit. Once the visit is over, doctors can access the patient’s digital medical record online and upload the results of check-ups and tests. At the same time, the patient is able to benefit from the personal medical record that can be shared with any number of doctors.

Fakih, who also has a background in health-care IT and who automatized the systems of a number of health organizations prior developing TrakMD, is persuaded that the platform will become mainstream. “The world is moving toward digitalization and it’s time for Lebanon to move ahead and be part of the global digital [revolution],” Fakih told The Daily Star at Beirut’s Berytech center, where the startup is located.

Issa, the business development manager at TrakMD, also shares Fakih’s optimism. According to Issa, the platform can potentially be used worldwide provided doctors and patients register in the system. “It can work without even having to contact us directly, the application can just be downloaded, there [are no obstacles],” he said.

Similarly, Lebanese people living abroad can download the app and book their appointments in Lebanon online to avoid phone charges.

Less than two months since its launch, TrakMD already has some 4,500 users and 400 registered doctors. The practitioners’ index book, however, includes the numbers and addresses of all doctors registered with syndicates in Lebanon.

“A doctor can be listed for free or he can choose to register to access our services,” Issa explained.

By registering for a fee that ranges between $30 and $90 per month, practitioners can activate online bookings, digitize their patient’s medical record and retrieve that information at any time, on any device. Once a visit is completed, users can also share their experience with other users by leaving a review of the doctor.

For some practitioners, positive feedback and better connectivity constitute a much-needed opportunity to expand their business. “We want to find new clients,” dentist Faten Raad said when explaining why the medical center she works for chose to adopt TrakMD. “We hope we will have more bookings.”

Endocrinologist Youssef Rachidi also shares the same hope. “People don’t always [have a clear picture of who] the best doctors are,” Rachidi said, adding that he found that the bulk of work is concentrated in the hands of a few well-known practitioners. TrakMD, he said, will take a few years to fully reach its potential but it will eventually help doctors achieve more visibility in Lebanon’s bustling medical market.

What Rachidi also appreciated about the platform is the fact that TrakMD is offering its own messaging service. “I am not happy when a client calls me or messages me on Whatsapp,” Rachidi said bluntly, adding that he perceives this as an intrusion in his personal life.

TrakMD’s Issa said the feature was expressly requested by a number of doctors they interviewed when developing the system. “With Whatsapp, doctors cannot avoid patients because they appear online. [With TracMD], patients cannot see if the doctor has seen the message or not,” he said.

Rachidi also noted that, at times, patients send him medical information on Whatsapp which he cannot save or put into context by reviewing the patient’s medical history. With TrakMD, however, he can save this information in their personal folder and review the medical history from his mobile device.

According to TrakMD’s funders, the platform can also be modified to include new features that fit its mission. Recently, the “blood module” was designed and installed in collaboration with the Lebanese Red Cross and other health providers.

“All users can request blood instantly by filling out a short form,” Issa explained. “TrakMD sends a push notification, so the request can reach a wider audience.”

Push notifications can be switched off, but users are still able to access the dedicated page and respond to one of the calls for blood whenever they are willing to.

“The blood module was the latest addition – it fits the humanitarian scope of [TrakMD],” Issa said. As the team works toward expanding its user base, the developers predict the platform will evolve and change, adapting itself to new needs as they arise.

A version of this article appeared in the print edition of The Daily Star on January 03, 2018, on page 3.
http://www.dailystar.com.lb/News/Lebanon-News/2018/Jan-03/432237-local-app-seeks-to-streamline-medical-industry.ashx 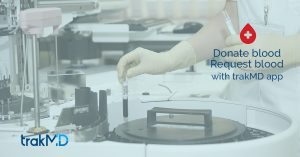 Blood is the most precious gift anyone can give to another person. You don’t need a special reason but just your own reason to give blood, give life. Every minute, someone in Lebanon needs blood. Blood cannot be manufactured or stored for long time, and there is a constant need for people to give blood. All people should engage in saving the lives of a baby, an adult, a woman in labor, a patient combating cancer, survivors of car accidents, terrorist attacks, or war. One day, you or beloved ones might need a blood that could save yours and your beloved ones’ lives.

To facilitate this humanitarian cause, trakMD has recently released a blood module, available with trakMD App on android store, that puts the power to save lives in the palm of your hand. It allows hospitals and people in urgent need of specific blood types and volumes to put out requests for blood, and all trakMD users will be aware of the requests via push notifications. trakMD users, in particular, potential volunteers can look up details of all blood requests and respond by calling the affected patient or family and visit the blood bank to donate blood.

It is unfortunate that sometimes people might need to call everyone they know and ask them to call those they know might share the same blood type as the patient and are willing to volunteer. trakMD helps those in need reach out to as many potential volunteers as possible, and thus aims to be the main hub for this humanitarian cause.

trakMD has made finding and booking doctors and dentists in Lebanon much easier than before. With easy access to the right care, integrated health reminders, and personal health record, a better health begins here.

Some of the common screening tests are:

Fecal occult blood is detected by microscopic analysis for blood in the stool. Blood in stool could be related to ingestion of certain medications or foods, gastrointestinal bleeding, hemorrhoids, or even cancerous growth indicative of colorectal cancer. Testing is recommended starting at age of 50 by many institutions including American Cancer Society

Pap smears are samples of cells taken from the cervix of women to look for a possible growth of cancerous cells indicative of cervical cancer. Pap smear may be referred as abnormal but may not mean that a woman has cervical cancer. Some organization recommend HPV (Human Papillomavirus) screening for certain women alongside the pap smear. Pap smear is recommended for sexually active woman under the age of 65.

Breast cancer can be detect by mammography or x-ray imaging of breasts. Mammography screening is recommended every 1 – 2 year after age of 50. This test is done in conjunction with a physical examination of breast that can be done on a monthly basis.

Screening for colon cancer is recommended at age of 50, earlier if you a family history or other risk factors

All adults should be screened for diabetes starting at age of 45.

Schedule an appointment with your doctors to discuss what screenings and exams you need and when you need them.

trakMD: Find & book doctors in Lebanon in the news: https://www.tayyar.org/News/Lebanon/187471 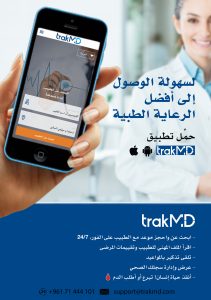 trakMD: Find & book doctors in Lebanon in the news: